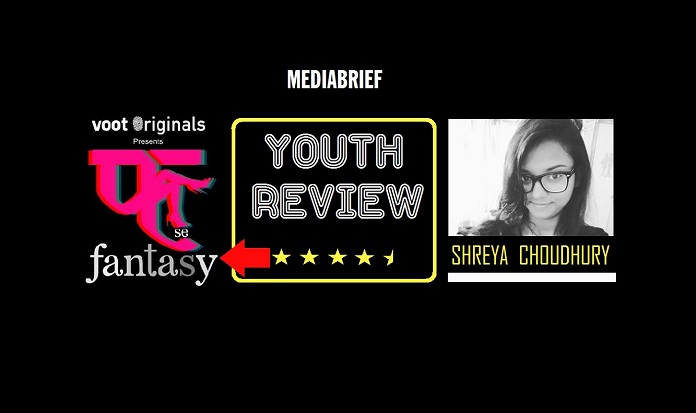 The first of the series is by young Shreya Choudhury, who looks at VOOT Original F Se Fantasy

An adult rated series, starring industries sizzling actresses like Anupriya Goenka, Plabita Borthakur and cute ‘crushed over’ actors like Karan Wahi and Anshuman Malhotra. It indulges in love, romance and fantasy along with other ‘real life complications’ as you love to call it.

One word for the show…Nah too less…won’t sum up even the title. A first-hand therapy to India’s modern-day hypocrisy; always ready to point fingers at others, and never reveal deep down you are the same. India is modern and is adopting western culture, but then why do people still stutter to say the three letters “SEX” in public.

I streamed this on Voot App (Voot Originals). Total Episodes: 9 (Only 1 season released by far)

What is wrong, what’s right depends only on perspective and are not stone engrossed definitions. Life is too short to live with regrets and “if only’ s”.

Modernization comes with an open mind and this series definitely is for the strong-minded. Ability to accept what we want despite the “judgmental” society’s decision is courage. This series brings with itself a whole new realm of dreams for singles, and ideas to spice up their sex life for couples who are willing to negotiate their interests.

My first impression “When do I get to try it out,” first reaction was losing consciousness to the real world to be in a similar phase as the story plays out. My personal favorite: ‘The Mile-High Club’ cute story of conflicting goals between ambition and relationship; wherein loves find a way to have both. I would say it took me a minute or two to adjust to reality after each episode.

Certainly, keeps the audience captivated and on the edge of their nerves; the only question that prevails: ‘what next?’ Free advice – until there isn’t a well-thought foreplay, sex is not gonna be as mind blowing as you might think. So go on, watch Fa Se Fantasy on Voot Originals and then, only when you’re ready to overcome the ‘Indian pandora’s box of feelings’, do lemme know your first impression.

More importantly, let your partner know ‘what next’ do you want.