Twitter is also planning on introducing a ‘Communities feature’ that will allow users to discover, create and join micro-communities based on their likes and interests. But as with most subscription-based models, the Super Follow feature only be beneficial for creators with a sizable chunk of followers. 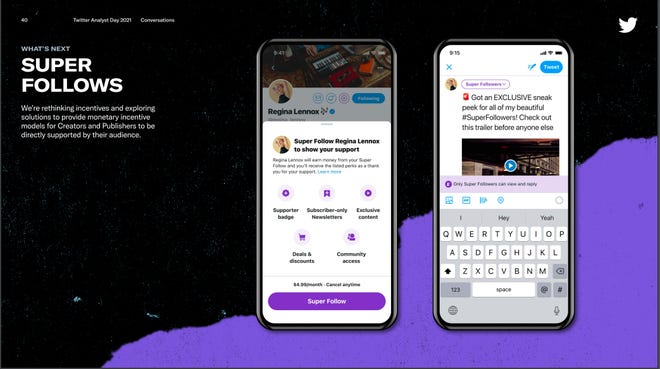 Dantley Davis, Twitter head of design and research, said, “We think that an audience-funded model where subscribers can directly fund the content that they value most is a durable incentive model that aligns the interests of users and creators.”

Post the announcement of the feature social media is divided with many users question its viability and need with a ‘RIP Twitter’ hashtag. Although as of now Twitter did not reveal what percentage of the revenue it would share with the celebrities and creators, the subscriptions from ‘Super Follow’ will allow Twitter to penetrate a broader range of revenue streams in the coming months.

Kayvon Beykpour, Product Lead Twitter, said that the price point will be customizable based on accounts and that Super Follows should roll out sometime this year.

Apart from Super Follow and a Communities feature, Twitter will also roll out a ‘Safety mode’ to create a safe and healthy environment free of abuse and harassment for its users.
To combat the spread of misinformation on its platform it has created ‘Birdwatch’. This scalable, Wikipedia-like model curated by contributors will help determine when the context should be appended to a tweet.