Patrick is Custodian of the prestigious Caples Awards, and former executive creative director of Ogilvy London and Head of Design for Google’s ZOO. Patrick is now also the editor of Directory magazine, showcasing innovative marcomms campaigns, and is working to drive the new-look.  Meera’s book, he says, ‘goes beyond describing the paradox of modern marketing. It sums up the effects of the digital revolution’.

We live in a world of paradox.

The mobile phone allows us to communicate over vast distances.

And yet it is alienating an entire generation.

Google gives us the answers to all questions. And inhibits us from working things out for ourselves.

Social media is, all too often, antisocial.

Well-meaning liberals are at the forefront of cancel culture.

A man who lies publicly rails against fake news.

A country made wealthy by its immigrant population turns against immigrants.

These are some of the thoughts that come bubbling to mind when I look at Meera Sharath Chandra’s book “The Me Era”.

There on the cover is the paradox of modern marketing.

It goes beyond describing the paradox of modern marketing.

It sums up the effects of the digital revolution.

It gets to the heart of the challenges facing the world today. 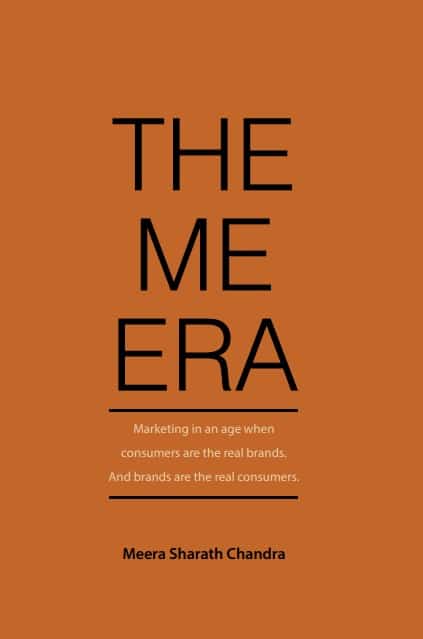 Very recently, Tim Cook, CEO of Apple, said in a widely-reported speech about data protection, “If we accept as normal and unavoidable that everything in our lives can be aggregated and sold, then we lose so much more than data. We lose the freedom to be human.”

Presumably with Facebook in mind, he warned that the “apps we use every day contain an average of six trackers”.

He added, “It seems no piece of information is too private or too personal to be surveilled, monetized and aggregated into a 360-degree view of your life. The end result of all of this is that you are no longer the customer, you’re the product.”

Your data is valuable.

And brands want a slice of you.

And not just you, they want access to your network.

It is estimated that there are over 50 million content creators out there at the moment.

They have under 50,000 followers so they are relatively cheap to engage.

Collectively, however, they are expected to have earned $10 billion in 2020.

Then they are selling on your data.

Strange to think companies earn more from packaging you than they do from selling you packages.

The unintended consequences of GDPR in the EU are said to be: it is too complicated for businesses to implement; it is expensive; it has damaged the economy; it has not increased feelings of trust among users; it negatively impacts our access to the internet.

All that free stuff we used to get online, soon it will cost money.

In the USA in 2005, the Federal Communications Commission declared that net neutrality was fundamental to the principle of a “vibrant and open” internet.

(Net neutrality is what prevents ISPs from blocking or slowing internet access so they can charge you for unblocking or speeding it up.)

It will come as no surprise to learn that the Trump administration has tried to end it.

It isn’t too far-fetched to suggest that a democratically elected government saw how it could block traffic and divert messages it didn’t like the look of.

Trump has been the (probable) beneficiary of data manipulation.

In the 2016 election, they were able to send alarming political messages to people they knew would be alarmed.

Facebook and Google don’t just have the ability to interfere with your personal use of the internet, they have every incentive.

Because, as Meera writes, brands have become the real consumers.

It’s why Apple is changing its operating systems. They are deliberately making it harder for Facebook and its advertisers to track where you go and what you do.

As Mark Zuckerberg has pointed out, Apple is using its “dominant platform position to interfere with how our apps and other apps work, which they regularly do to preference their own.”

Brands are being asked to make a choice.

But “The Me Era” has to be one heck of a book if its cover alone can be so stimulating.

In that sense, it’s a book you don’t need to open to read.

As I say, we live in a world of paradox.