Fantasy sports offer a near-perfect juxtaposition of Fantasy and Reality for players. For the uninitiated, Fantasy Leagues are virtual tournaments held between players where the winner is determined by the performance of real athletes / sportspersons in real life tournaments like the IPL, EPL etc.

Users earn points based on the performance of the “real life sports people” in real matches that they select for their Fantasy League Team. The better “your” player does, the better you do. In this gamification of reality, winners are determined through points and in cases of paid tournaments, even win cash prizes.

While cricket remains the most popular fantasy sport in India, Sports like football, kabaddi, and hockey are increasingly attracting users. Clarity around legality has bolstered business. 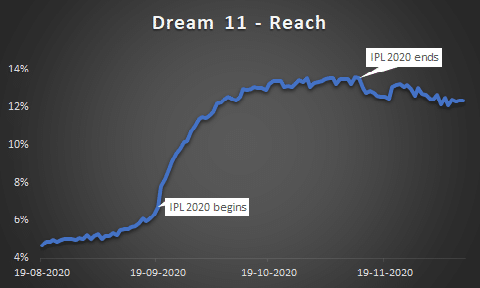 The lockdown drove up online entertainment and most gaming categories saw a spike in users and heightened engagement. If the reach of Dream11 (the category leader) is anything to go by, when IPL 2020 finally kicked off on September 19th, it gave a fillip to fantasy sports.

These numbers were also driven by strategic partnerships, Dream11 won sponsorship rights for the IPL after Vivo pulled out; the ‘Official Fantasy Game’ of IPL was also powered by Dream11.

This period also saw smaller players like FanFight, My Team 11, My 11 Circle, and Gamezy grow their user base.

MPL’s reach, on the other hand, spun a different story (more on this shortly). 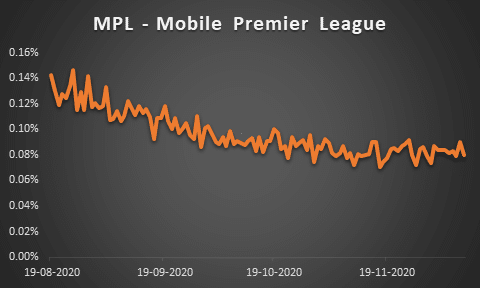 How often users open an app in a day (Open Rates) and how much time users spend on the app (Total Session Time) likely depends on when the big games are scheduled. 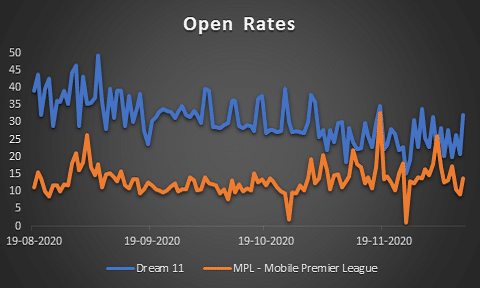 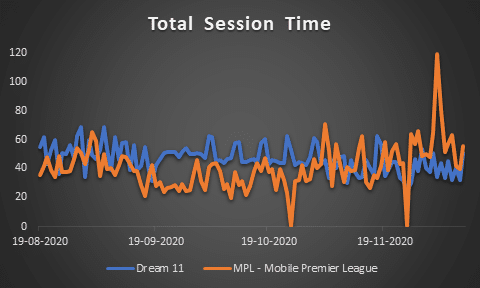 While MPL has a much smaller base than Dream11, user engagement is largely similar (especially on session times). Signing up Virat Kohli as brand ambassador and a slew of fundraising rounds have helped it ramp up visibility, besides pushing it to near unicorn status. Further, in November BCCI chose MPL to be the kit sponsor for Team India.

At its peak, nearly 60% of Dream11 users were active on the app (pretty remarkable). Though far behind on the proportion of active users, MPL has seen lower variability and dependence on the IPL for engagement. 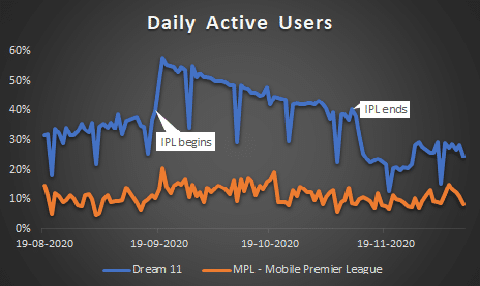 With more leagues coming up across sports, these platforms are uniquely placed to help fans engage better with sport. Dream11 claims to have a 100mn+ user base while MPL has said it has more than 60mn users in India and over 3.5mn users in Indonesia. While Dream11 is a pure play fantasy sports platform and seems to have placed its fortunes firmly on the IPL and cricket; fantasy sport is just one of MPL’s 60+ online gaming offerings (including Ludo, Chess & Pool).

It’s difficult to say which model is better. Cricket is like a religion here in India and Dream11 is a clear market leader. But the focus on one sport leaves the proverbial ‘field’ open for others to enter as MPL in fact has and is slowly expanding to other geographies.

The potential is massive – according to the Fantasy Sports and Gaming Association, over 59mn people are engaged in fantasy games across the U.S. and Canada. Compared to this, only 20mn Indians are playing fantasy games, a figure projected to reach 150 million by 2022.

To give you a sense of the opportunity – Draftkings is a public listed Fantasy League in the US – worth $26.94Bn (as of Monday); its largest competitor – Fanduel (owned by Flutter) is worth an estimated $11.22 Bn (as of December 2020).

While ARPU & LTV may be lower in India, audience sizes (addressable markets) as we know are exponential. 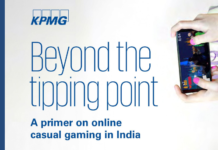 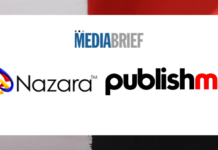 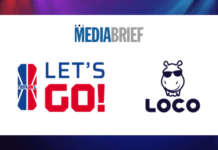 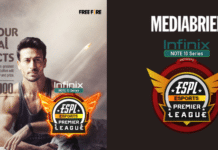 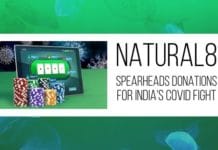