Writing exclusively for MediaBrief.com, Ramalingam Subramanian, Head of Brand and Communications at CoinDCX, clears the air around Bitcoins, examines the shift in investors’ perception, explains why it is a lucrative alternative for investors, and focuses on the next phase of its growth.

The author has extensive experience working as a Brand Consultant with various industry leaders, SMEs, and young startups. Creating a brand strategy, laying out the campaign plans as well as creating, developing, managing and delivering on Marketing Plans are some of the areas he specializes in. At CoinDCX, his focus is on streamlining the company’s marketing strategies as well as building the platform’s global brand.

Before CoinDCX, Ramalingam was associated with leading brands like Cipla, Coca Cola and the Tata Group, and managed his brand strategy firm with a presence in both Indian and European markets.

Why you may regret not owning’ Bitcoin today?

As of today, the Bitcoin market value has crossed over USD 1.03 trillion for the first time in history and since 2016 it was being referred to as a ‘Digital Gold’. While doing so, it has outperformed any other traditional asset class in the current times. On the other hand, the total cap of gold as of today is around $11.371 trillion.

Even till last year, cryptocurrencies were being viewed with suspicion by governments, media, and even investors. It was deemed risky, too volatile, and unpredictable as an asset class. Senior investment heavyweights like Warren Buffet of Berkshire Hathaway had deemed it ‘rat poison squared’.

But come 2021, there is a complete 360 degree turn in perception as Bitcoin sees a surge in adoption from well-known investors, hedge fund managers like, Jacob Skaaning of ARK36, and big financial institutions and businesses like Mastercard, BNY Mellon, Microstrategy, Blackrock, and Tesla Inc.

The institutions are not rushing into Bitcoin because they expect it to replace commodities like metals. At the end of the day, every fund manager is essentially competing against each other to provide the best returns for their client. They all work towards building a better portfolio to rival competitors. Currently, Bitcoin’s market capitalization is now just over 10% that of gold’s. 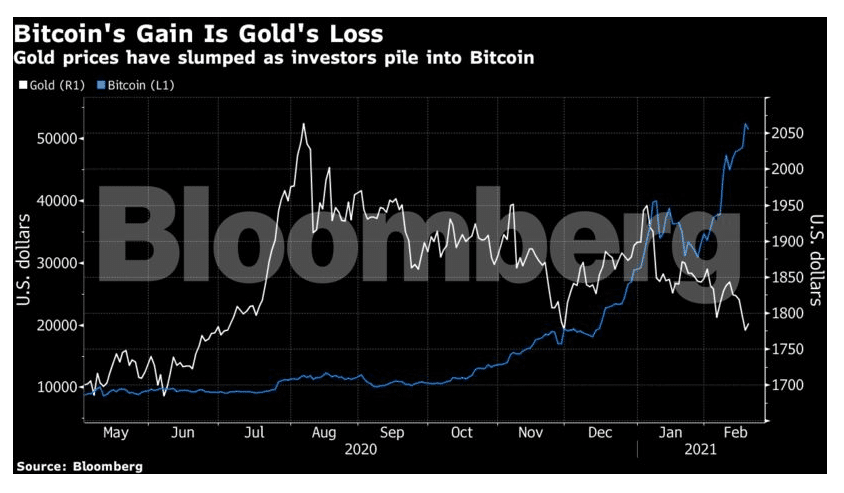 As Anthony Pompliano of Pomp Investments and Morgan Creek Digital Assets recently pointed out that bitcoin had a 100x improvement over gold in ‘store of value’. He predicts that the value of Bitcoin would continue to appreciate in terms of USD over the coming years and surpass gold’s market cap by the year  2030. Most experts who support recommend investments in Crypto market suggest allocation of 1-5% of your disposable income into crypto portfolio.

Who is believing this story?

The trend started last year when serious investors started investing in Bitcoin as an asset into their order books. Some of these investors were either doing so for the first time or had bought more last year than they had done all through 2013-2019. Take the example of Microstrategy, the US-listed business analytics firm which invested in excess of USD 250m in bitcoins in August of 2020 believing it has long-term benefits than holding cash.

In October the same year,  Square Inc., a financial and merchant service company invested 1% of its asset base by purchasing $50 million worth of bitcoins. Also jumping in the fray last year was Grayscale investments, an asset management company that had $7.4 billion in BTC in its portfolio for institutional investments. It owns 2% of the total supply of bitcoins. By end of the year, UK-based asset manager Ruffer informed that it had made a primary investment worth GBP 550m.

What is leading this crypto asset rush?

Two things that any investor looks for in his investment are:

As bitcoin’s correlation with other stocks and commodities declines, it has made investors look at it as a part of their portfolio diversification. As per media reports, the correlation of the S&P 500 index and Bitcoin dropped from 0.50 as reported in October of 2020 to 0.21 by Feb this 2021. 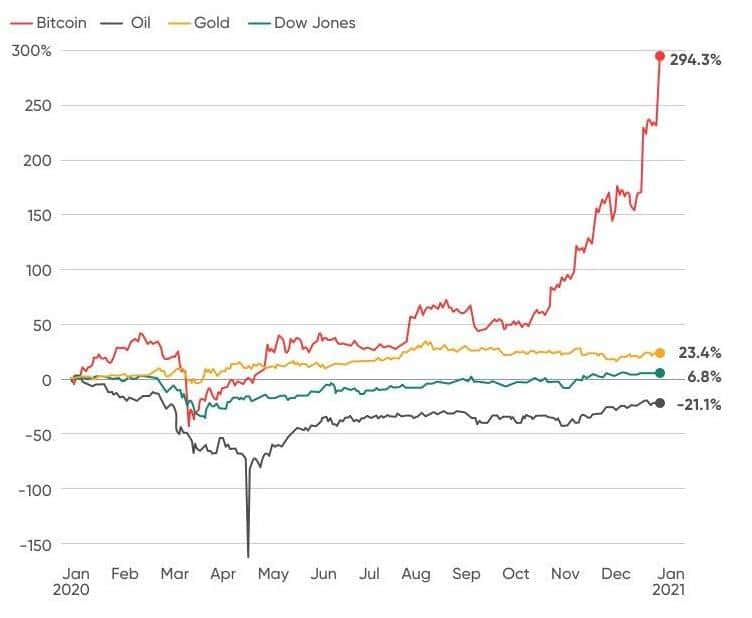 Traditionally, most traders would deal with metals such as gold to have an edge over rising inflation. The part that makes Bitcoin so lucrative for investors is the scarcity, and it has a finite amount that can be mined. Compare this with gold, which accrues additional cost to secure, protect and transfer it. Add to this, the issue of its impact on currencies and has the potential of being devalued or controlled by the government, institutions, or even individuals.

It also has the tendency to lose value in physical format as it changes forms. Compared to this, Bitcoin cannot be controlled by anyone as it works on Blockchain technology which cannot be manipulated. As our economy slowly moves away from the cash to digital format, investors want to stay hedged against market swings. Bitcoin’s correlation with stocks and gold is declining as the token scales fresh peaks, bolstering arguments that cryptocurrencies offer portfolio diversification benefits.

Where is the action taking place?

Bitcoin has a finite number. Only 21m Bitcoin can ever be mined. Its value is expected to increase as network effects create a virtuous cycle of greater innovation and adoption. Till now we were a witness to what is described as the Genesis Block phase.

With increased investment from institutional investors, there is an influx of money coming into it as an asset class. More and more investors today are reflecting the sentiments of investing in bitcoin rather than holding on to fiat/currency. This change in attitude is based on the fact that bitcoin is now being viewed as ‘derisked’.

With this, the focus of the next phase of growth is expected to be in form of the network it creates. As more and more big corporations, investors adopt Bitcoin as a store of value, we can expect more capital flowing into its network over time. Also, with the limited supply and an ever increase in demand, analysts expect the prices to only go up. It is expected that if in the first phase Bitcoin made millions, going forward it will rise to billions in the next phase.